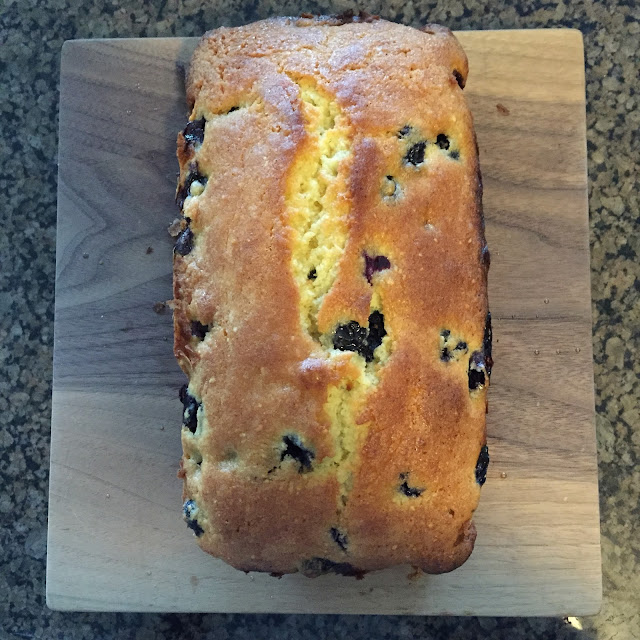 I'll be honest: the only reason I made this cake was because I had all the ingredients already and I didn't feel like spending money and going to the grocery store to buy new stuff.

Basically, it's the lazy woman's cake. 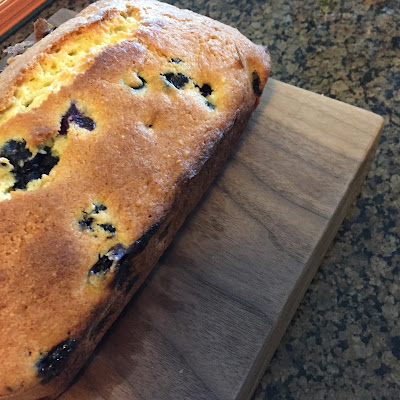 Originally, this recipe called for sultanas - in the baking book "À La Mère De Famille" (and it just took me 10 minutes of Googling to figure out how to use accents on a Mac) it's actually called "Sultana Cake." But I hate sultanas. So, I looked in my fridge and found that I had blueberries that desperately needed to be eaten or else into the green bin they would go, and that's how it became Blueberry Loaf Cake. (Sorry, French baking chefs.)

This baking book - which uses recipes from the eponymous Parisian store - is a delight to browse through, even if you don't like baking. Gorgeous pictures of truffles, decadent marshmallows, nougats, candied confections and plenty of chocolate delicacies will make you (almost) feel full after you take a look. 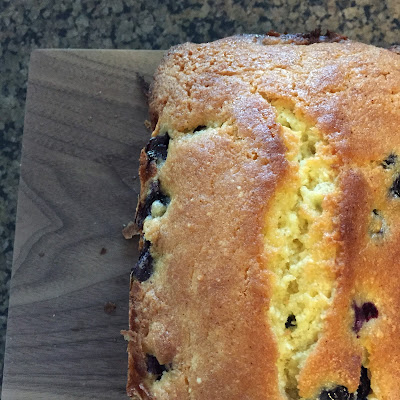 It looks good enough that I just might have to convince my husband to go on another trip to Paris with me just to check out the shop's goods for myself.

Until then, I'll just tweak their recipes sans sultanas. 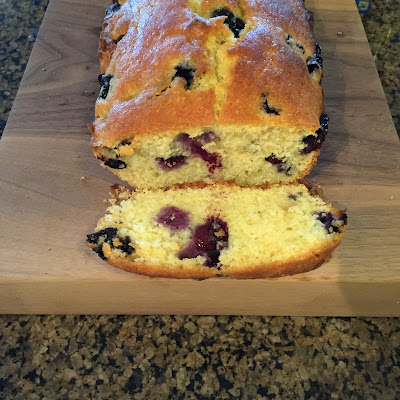 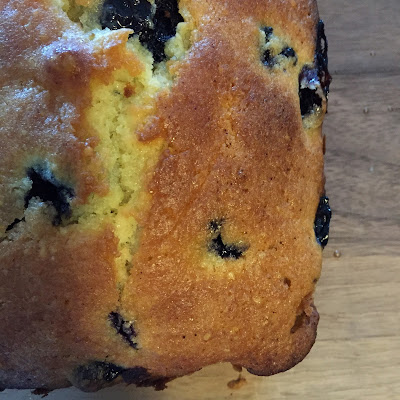 Sift the flour, ground almonds and baking powder into a small bowl. Set aside. If you're using sultanas, get another small bowl and soak the sultanas in the rum for at least 15 minutes. If using blueberries, just make sure they're washed with water and set aside. In a large mixing bowl, cream together the butter and confectioners' sugar until smooth. Add the eggs, one at a time, beating constantly until they are well incorporated. Fold in the flour, then the blueberries (or sultanas and their liquid).

Preheat the oven to 400 degrees Fahrenheit. Line the 9- by 4-inch loaf pan with parchment paper. (I coated it with butter first so the paper would stick nicely to the sides.) Pour the batter into the prepared pan. Bake for 5 minutes, then make a lengthwise incision in the top of the cake with a sharp knife. Lower the oven temperature to 300 degrees Fahrenheit, then return the cake to the oven and bake for about 40 minutes, until the cake is golden-brown and a knife inserted into the middle comes out clean. Remove the cake from the oven and cool in the pan on a wire rack for 10 minutes, then turn the cake out of the pan.

In a small saucepan, combine the water, sugar and rum. Bring to a boil, then remove from the heat and, while cake and syrup are still warm, use a pastry brush to moisten the cake with the syrup. Cool completely before serving. (The cake will keep in an airtight container for up to 5 days.)

Voilà! Now you too can eat like the French!