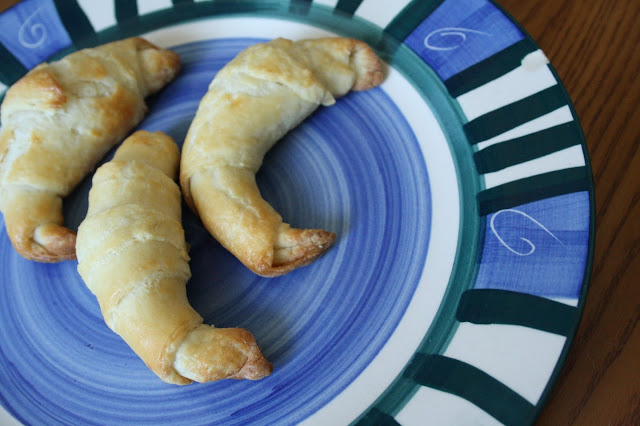 I hate to admit this, but I had never heard of Julia Child until the 2009 movie "Julie & Julia" starring Meryl Streep as the 6'2 former OSS employee-turned-baker extraordinaire. Because I love Meryl movies, I became obsessed with this film, particularly since it involves cooking and, more importantly, baking.

I started reading up on Julia Child and her famous cookbook "Mastering the Art of French Cooking" which was first published in 1961 (Vol. 2 was published in 1970) and, in all honesty, I was really intimidated by the complex, 10-page long, 12-hour minimum recipes. 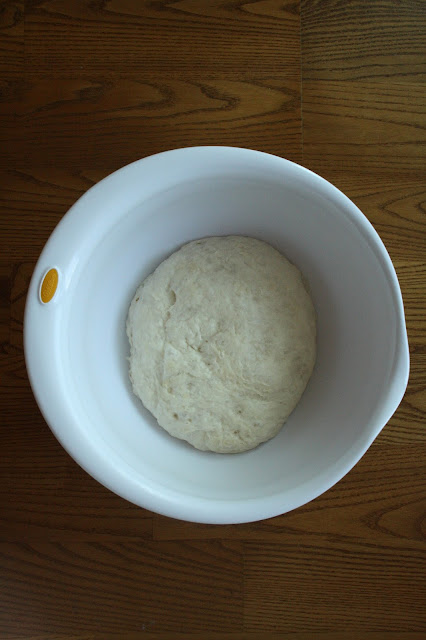 If you know me well, you would know that I'm the kind of girl who eats yogurt and/or toast for dinner so the thought of spending all night slaving in my condo-sized kitchen, when there was a particularly yummy coffee yogurt sitting in my fridge, did not make me want to go and spend $30 for what would end up being a coffee table book to impress my friends.

But last October, I had the chance to go to Paris again (my third time) with my boyfriend Mike and I dragged him to the famed English bookstore "Shakespeare & Co." which appeared not only in "Julie & Julia" but in my other favourite Parisian movie, Woody Allen's "Midnight in Paris." God, if only I could live in that bookstore for the rest of my life. 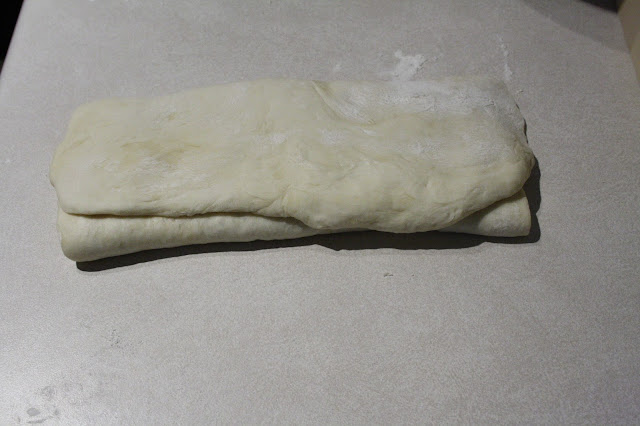 After dragging Mike there on multiple trips (and asking him if it was an investment to buy a $1,500 first edition of F. Scott Fitzgerald's "The Great Gatsby"), I settled on (the cheaper, modern-day copies of) Fitzgerald's "Tender is the Night", Irene Nemirovsky's "The Misunderstanding" and lastly, Julia Child's "Mastering the Art of French Cooking Vol. 2."

Why did I pick Julia's Vol. 2 over the more popular Vol. 1? Simple. It had recipes for brioche and croissants, two of my favourite foods to eat, anywhere (besides coffee yogurt).

The recipe for croissants is eight pages long and takes, according to Julia's instructions, a minimum of 11 to 12 hours. Had I not frozen my croissants over night, it probably would have taken me about 13 or so hours. But because I really wanted to go to bed, I froze them before the last pre-bake rise, and finished them in the morning. 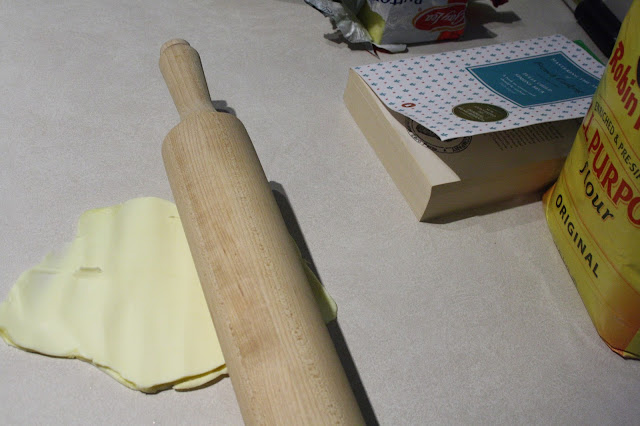 This was my first time baking croissants so they were by no means perfect and I know what I will do differently next time I make them.

For one, I will let them rise for their last one-hour pre-bake rise if I decide I want to freeze them before baking them, rather than trying to make them rise after being frozen. Tip: If you want to freeze them overnight to bake them in the morning, let them rise for one hour before you freeze them. If you don't, they won't really rise when you take them out of the freezer. If they don't rise, the croissants will end up being a little bit on the harder side, and won't be as fluffy and light.

I will also be more patient when it comes to forming their crescent shape. Some of them ended up looking like dragon tails. 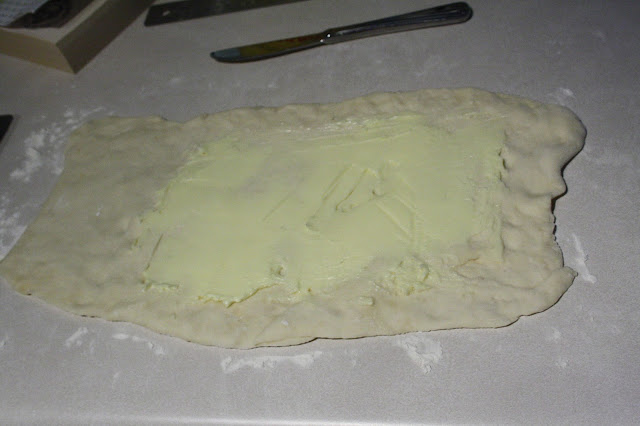 Lastly, I will recognize that they don't have to be perfect, especially since I am a novice at baking croissants. It's okay to mess up. That's what learning is for.

Was it worth all the waiting and cursing? Yes. They were delicious. They could have been more soft, but they were mostly tender and great with jam. It's also fun to brag about.

On to the super-long instructions! 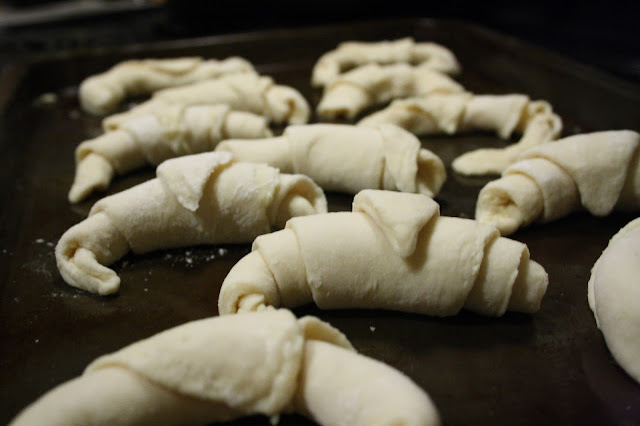 Mix the yeast in the warm water with the sugar and let liquefy completely.

Measure the flour into mixing bowl. Dissolve the sugar and the salt in the tepid milk. When yeast has liquified, pour it along with the milk mixture and oil into the flour. Blend the elements into a dough by cutting and pressing with a rubber spatula, being sure all the bits of flour are gathered in. Turn dough out on to the kneading surface, scraping bowl clean. The short rest allows flour to absorb liquid; dough will be soft and sticky.

Start kneading by lifting near edge, using a scraper or spatula to help you, and flipping if over on to the other side. Rapidly repeat the movement from one side to the other and end over end eight to 10 times until dough feels smooth and begins to draw back into shape when pushed out. This is all the kneading it should have. 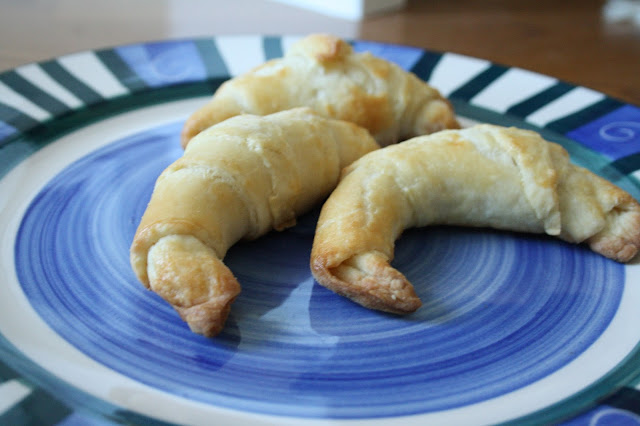 The dough is set to rise 3 1/2 times its original volume. Put it in a large mixing bowl. Cover with a plastic sheet and a bath towel and place at room temperature. In three or four hours the dough should have risen sufficiently and should be light and springy to touch.

After three or four hours, deflate the dough by loosening it from the edges of the bowl with a rubber spatula and turn it out on a lightly floured surface. With the lightly floured palms of your hands, pat and push the dough out into a rectangle about 8 x 12 inches. Fold in three as though folding a business letter. Return dough to bowl; cover again with plastic and bath towel.

Let rise a second time, about 1 1/2 hours, to double the original volume. Then loosen dough from edges of bowl and turn out on a lightly floured plate. Cover airtight and refrigerate for 20 minutes.

*At this point, if you don't have the time to finish, you can set the dough in a colder place to rise, or let it rise the second time overnight in the fridge. 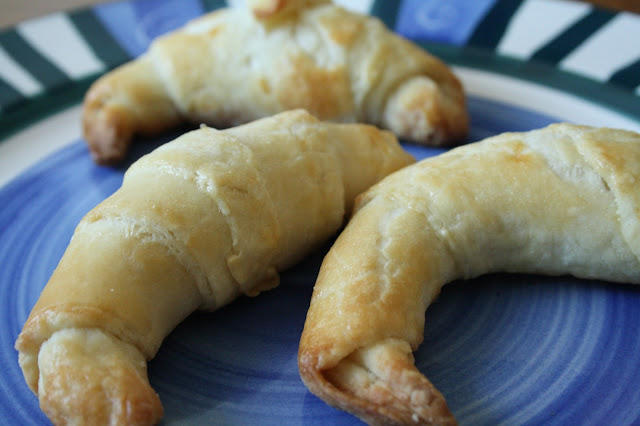 Butter must now be worked into a smooth but still cold paste that can be spread evenly on the dough and then rolled with it. Beat the butter with a rolling pin to soften it. Then smear it out with the heel of your hand or a scraper or spatula until it is of very easy spreading consistency but still cold; it must not become soft and oily- refrigerate if necessary.

Place chilled dough on a lightly floured pastry marble or board (I just used my counter cause I don't have marble and my board isn't big enough). With the lightly floured palms of your hands, push and pat it out into a rectangle about 14 x 8 inches. Spread butter as evenly as possible over the upper two thirds of the dough rectangle, leaving a 1/4-inch unbuttered border all around. Dough is now to be folded into three layers, just as though you were folding a business letter. Fold the bottom (unbuttered) third up to the middle. Fold the top (buttered) third down to cover it, making three even layers of dough separated by two layers of butter. This is called "turn number 1." 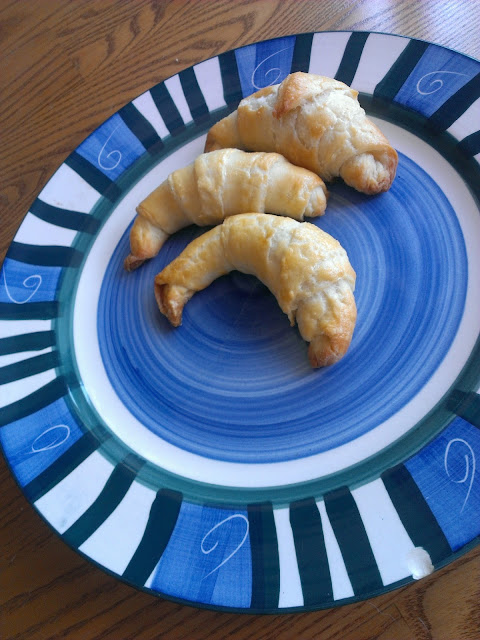 For "turn number 2," lightly flour the top of the dough and your rolling surface, turn the dough so the edge of the top flap is to your right, as though it were a book you were going to open. Roll the dough into a rectangle about 14 x 6 inches. Roll rapidly, starting an inch from the near end and going within an inch of the far end. Fold again in three. You now have seven layers of dough separated by six layers of butter.

Sprinkle dough lightly with flour, wrap in waxed paper or plastic, place in a plastic bag and put in fridge. Dough must now ret for 1 to 1 1/2 hours to deactivate the gluten so that you can make the two final rolls without difficulty.

After the rest in the fridge, unwrap the dough, sprinkle lightly with flour and deflate by tapping lightly several times with rolling pin. Cover and let rest for eight to 10 minutes, again to relax the gluten. Being sure that the top and bottom of the dough is always floured, start rolling dough into a rectangle of 14 x 6 inches. Fold the rectangle in three, roll again into a rectangle and fold in three to complete the final turn. Wrap and chill for two hours before forming dough into croissants, or leave overnight covered with a board and a five-pound weight. 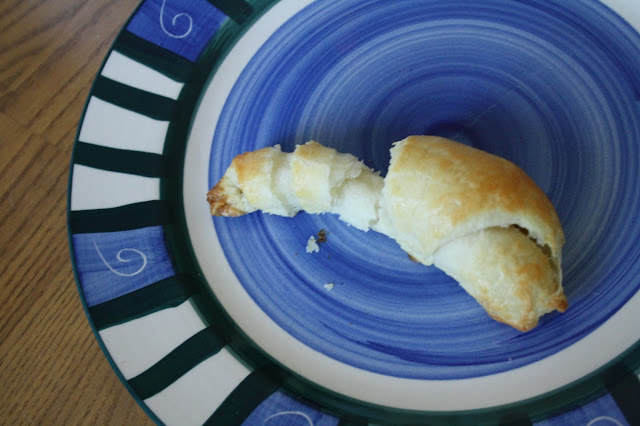 After resting for two hours, the dough is now ready to be rolled out into crescent shapes. You can either use a rolling cutter or cut by knife. (I used a knife.) To make everything easier for yourself, refrigerate all the pieces of dough you are not currently working on.

Roll dough into a rectangle 20 x 5 inches; cut in half crosswise and chill the first half.

Roll your one half of the dough into a rectangle 15 x 5 inches; cut into three crosswise and chill two of the three pieces.

Roll the one piece of dough into a 5 1/2 inch square and cut into two triangles.

Holding one of the triangles of dough by its large end, roll it out towards the point to make the triangle about seven inches long. Then, to extend the large end slightly, stretch the two top angles of the triangle lightly between your thumbs and forefingers, enlarging the end about an inch in all. Start rolling up the croissant first by folding the large end forwards onto itself. Then, holding the point with the fingers of your left hand, finish the roll under the fingers and palm of your right hand. Bend the two ends down to form a crescent shape and place on a lightly buttered baking sheet, with the point resting inside curve and against the surface of the baking sheet.


Cover the croissants loosely with a large sheet of plastic at room temperature for their final pre-baking rise for about an hour. Dough should almost double in size and feel light and springy when touched. If it doesn't rise, the baked croissants will be heavy.

*At this point, you can freeze the croissants over night if you wish to bake them the next day.

Just before baking, paint the croissants with egg glaze then set in middle level of preheated oven for 12-15 minutes, until croissants are nicely puffed and brown. Cool on a rack for 10-15 minutes before serving.