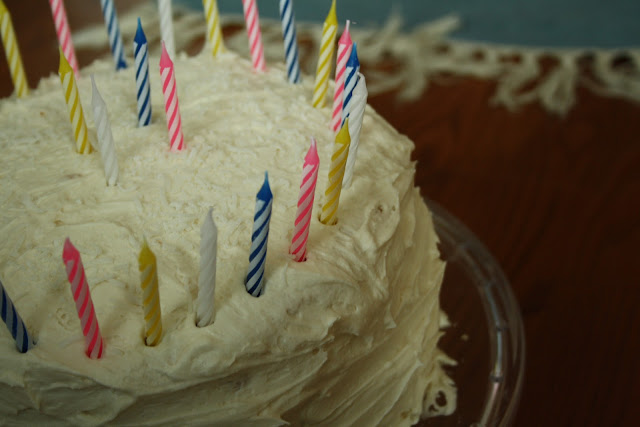 Today is my boyfriend's Mike's birthday. Normally for birthdays I like to make something non-traditional, for example last year I made him a chocolate Guinness cake with a mocha glaze. One time I made a carrot cake for my cousin Cam that had so much oil, it made holes in the cake which the cream cheese icing spilled into. (It wasn't that good, tbh). 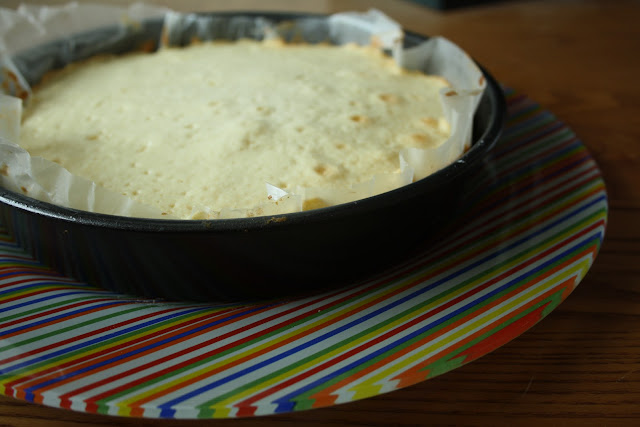 I've been baking a lot of really different cakes and other treats for the birthdays of family and friends but this time, I wanted to go back to a classic: the traditional vanilla birthday cake. 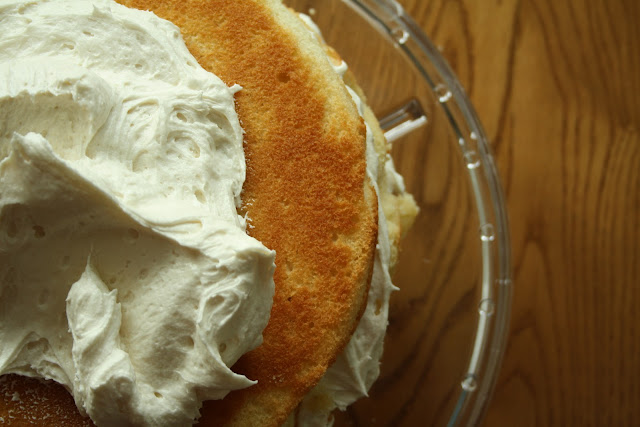 Two weeks ago, Mike and I went to New York City, the land of the cupcakes. While there, we stopped off at Magnolia Bakery at Grand Central Terminal (as well as this incredible cupcake store called Baked By Melissa which served mini-mini cupcakes) and bought their cookbook (and delicious cakes.) 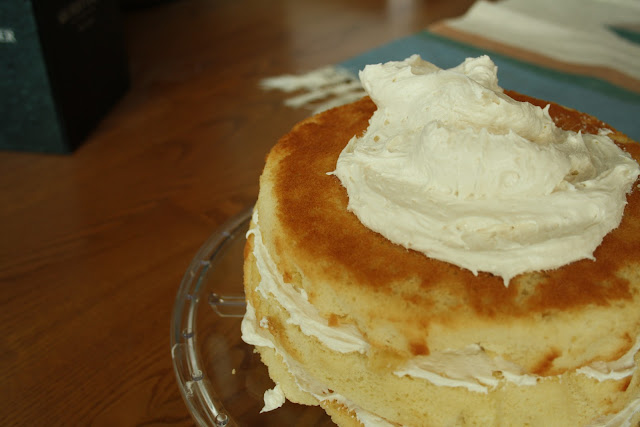 I flipped through it and saw a photo of a delicious-looking vanilla cake with sprinkles. That's it! That's the cake I'm going to make for Mike's birthday, I'll be damned if he likes it or not.

I made a few changes to the book's recipe for vanilla buttermilk icing; instead of 8 cups of confectioners' sugar, I used 7 and I used 1/2 cup milk rather than 3/4 cups. I also added coconut to the top. 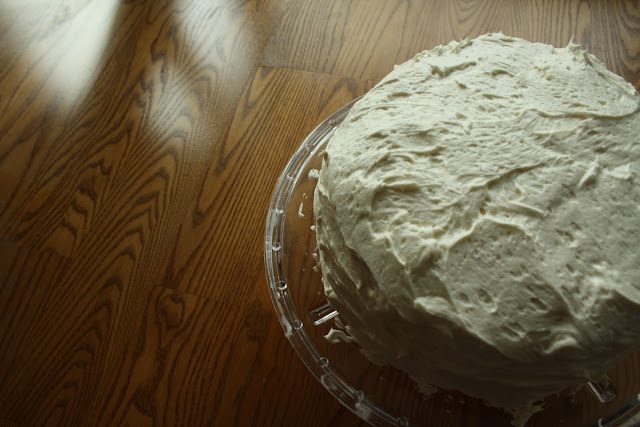 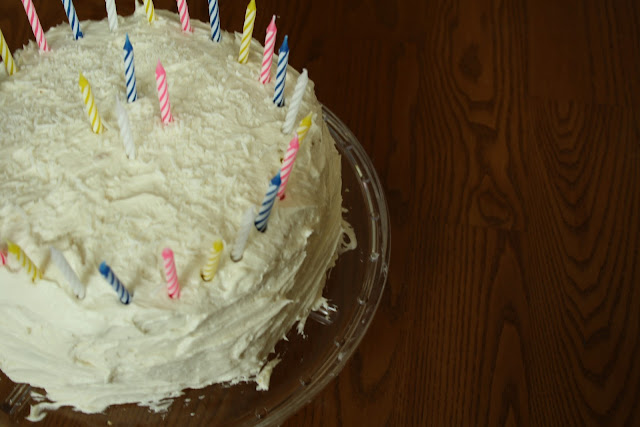 Grease and lightly flour three 9x2-inch round cake pans, then line the bottoms with waxed paper.*

In a large bowl, on the medium speed of an electric mixer, cream the butter until smooth. Add the sugar gradually and beat until fluffy, about three minutes. Add the eggs one at a time, beating well after each addition. Combine the flours and add in four parts, alternating with the milk and the vanilla, beating well after each addition. Divide batter among the cake pans. Bake for 20-25 minutes or until a cake tester inserted into the centre of the cake comes out clean.**
Let cakes cool in pans for ten minutes. Remove from pans and cool completely on wire rack.
When the cake has cooled, put icing between the layers, then icing the top and sides of cake.*** 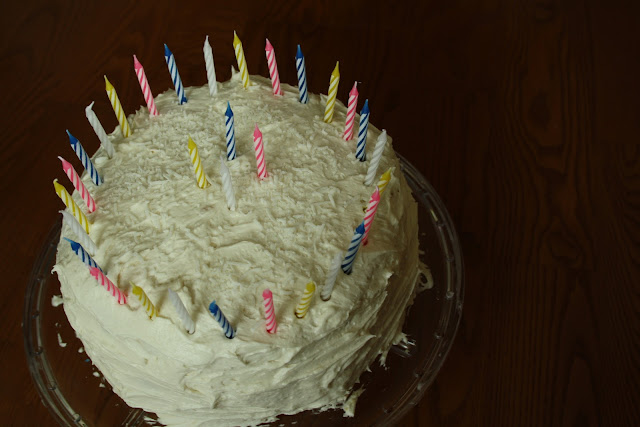 *I have major problems with waxed paper. When I eventually take the paper off the cooling cakes, it rips part of the cake off and the sides look uneven. I'm not sure what the solution is besides just greasing the pan and putting the cake right on it but then you run the risk of the cake sticking to the pan. Tricky... if anyone has suggestions, please let me know!

**It took 25 minutes in my oven. Don't let the bone-white top fool you; it's supposed to look like that.

*** It's easier to icing a three-layer cake on a cake stand at level eye. 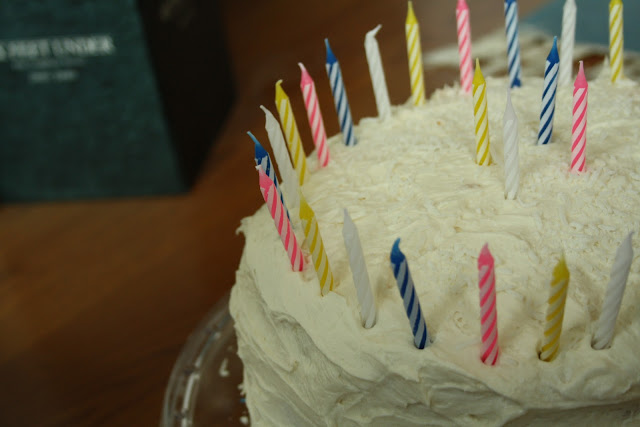 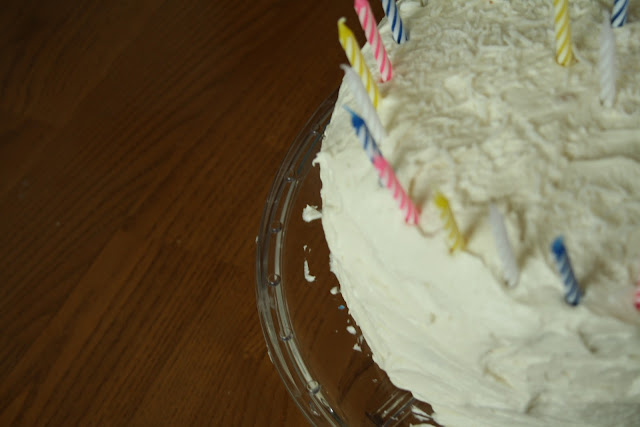 Place the butter in a large mixing bowl. Add four cups of sugar and then the milk and vanilla. Use an electric mixer on medium speed and beat until smooth and creamy, about three minutes. Gradually add the remaining sugar, one cup at a time, beating well after each addition until the icing is thick enough for good spreading consistency. You can also add food colouring at this point. Icing can be stored in an airtight container for up to three days. Makes enough icing for a three-layer cake.